Covent Garden’s Henrietta Street has experienced something of a renaissance in recent years and is fast becoming the West End’s go-to destination for men’s fashion and great dining.

Long regarded as the poor relation of the rather more glitzy and regal sounding King Street to which it runs parallel, it was originally built in 1634 as part of the Duke of Bedford’s estate and named after the consort of King Charles I, although most of the current buildings actually date from the 19th Century.

Many of the street’s original occupants were tradesmen, however as the area further developed many of the houses were acquired by members of the nobility. By the late 1600’s numerous shops begun to appear, along with coffee shops and a number of pubs. In the late 19th Century the street became well known for its various publishing houses, and Covent Garden is still synonymous with the publishing industry to this day.

For many years, Henrietta Street was a rather nondescript thoroughfare linking the Piazza and Southampton Street, populated by various chain bars and restaurants and nothing really of note, compared to the many delights on offer from the other streets surrounding the Piazza.

However Covent Garden Landlords CapCo have long seen its potential and following the success of the regeneration of the Piazza, King Street and other notable streets on the estate, some super snazzy retailers and great new restaurants have been attracted to the handsome period facades of this historic street. Not only this, but some fantastic homes have been created along the length of the street, and the combination of retail, restaurant and residential have given the street a new lease of life and a very distinctive buzz.

On the restaurant front, at one end of the street you’ll find the Ivy Market Grill, sister restaurant to the West End’s legendary Ivy. Serving a similar menu to its more established sibling, the Market Grill is aimed at the lunch and theatre crowd, so service is speedy, although never rushed. 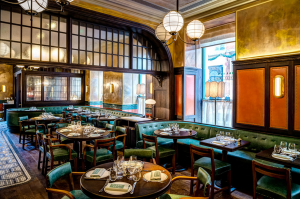 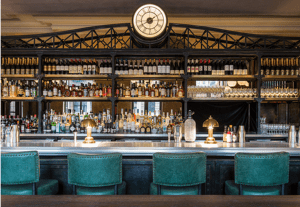 With a beautiful ‘faded grandeur’ interior reminiscent the grand dining rooms of days gone by (and with a very similar atmosphere to The Ivy) it also has the benefit of a heated outdoor terrace, perfect for people watching on the piazza and catching some of the famous live performers on the cobbles outside St. Paul’s Church.

At the other end of the street, you have two very different and exciting eateries in the shape of Flat Iron and Frenchie.

The Flat Iron name (and reputation) had been around the West End for some time with outlets in Soho’s Beak Street and Denmark Street (as well as an outpost in Shoreditch), but London’s seemingly insatiable appetite for great steak meant they had to find somewhere a little bigger to compliment the existing restaurants, and 17-18 Henrietta Street was the perfect fit! As seems to be the case with many of London’s hippest joints, there’s a no booking policy, however the queue at peak times moves pretty quickly and there’s plenty to look at whist you’re waiting as the butchery room is in full view of the street, so you may even catch a glimpse of your dinner being freshly chopped. If you prefer not to queue, the friendly staff will take your number and call once a table comes free, if you’d rather wait elsewhere.

The interior is all dark, warm, natural materials with dim lighting, a very cosy and inviting atmosphere perfectly complimenting the menu (limited to the signature flatiron steak and a smattering of scrumptious sides, what more could you need?) which keeps service swift. A handsome selection of craft beers are on hand to accompany, and to top it off a free ice cream cone on your departure, provided you haven’t tried to half-inch one of the lovely mini-cleaver steak knives from the dining room (there’s an amnesty at the door, apparently the cleavers have become rather sought after keepsakes following a well oiled meal, cheeky!) Oh, and did we mention its only a tenner?!

Right next door is a very different offering indeed in the form of Frenchie, one of Henrietta Street’s newer residents. Not surprisingly, Frenchie originally opened on Paris’s Rue du Nil in the 2nd arrondissement to great acclaim, spawning a wine bar, take away and wine shop, but an expansion to London was inevitable as head Chef Gregory ‘Frenchie’ Marchand spent several long periods honing his craft in the capital, notably at the Savoy, Mandarin Oriental and latterly under Jamie Oliver at Fifteen (where the nickname Frenchie was coined).

The setting is a stark contrast to next door, with much brighter lighting and paler tones, yet still with an industrial feel (exposed brick, steel) offset with some beautiful materials (marble, brass) that creates a chic and inviting space to dine (as you would expect from someone called Frenchie!).

The menu is French in its execution (classy) but with influences from all over the world that reflect Marchand’s travels from New York, via London to Spain and Hong Kong, complemented by a carefully selected wine list and seasonal cocktail menu.

The lunch menu offers two courses for £26 (or three courses for a very reasonable £29) and a four course tasting menu is on offer in the evening for £55 a head, or go the whole hog with a wine pairing for £100.

Its fine dining in a classy yet relaxed atmosphere, with an interesting and adventurous menu, plus excellent wines and superb cocktails, a winning combination all round and a welcome addition to the Covent Garden restaurant scene.

Lastly to Sticks ‘n’ Sushi which, contrary to what the name suggests, originated in Denmark. Originally the brainchild of brothers Jens & Kim Rahbek, the concept was a celebration of their half Japanese, half Danish background.

The menu is, as you would expect, a combination of the two Japanese culinary traditions of Sushi and Yakitori, which is meat (or vegetables) grilled over charcoal and served on wooden skewers, accompanied by a range of Japanese salads. The bar at the back serves a range of Japanese inspired cocktails so drop in early for an aperitif, or hang back after dinner for a digestif or two…

Now Henrietta Street isn’t all about the food, like many other spots in and around Covent Garden its becoming synonymous with fashion retailers, but in particular men’s fashion. The focus is on informal and stylish menswear with predominantly independent brands and boutiques.

A designer who’s been producing military influenced menswear collections for over forty years, Nigel Cabourn celebrates the best of British with designs based on an impressive archive of vintage pieces he’s been amassing since the 1970’s, with the clothes on sale at this boutique (known as the Army Gym) produced to the highest standards by British craftsmen in the UK.

Another vintage military inspired brand, but this time from the US Navy, cult Japanese brand The Real McCoy’s made its name with handcrafted denim of which the boutique has plenty, along with its range of A-1 and A-2 leather flight jackets.

Fred Perry is a the legendary label that’s been a major feature in youth culture for over half a century, and a part of the Covent Garden fashion scene for many years.

The Henrietta Street store was the first to stock the ‘Reissues’ collection, and features the Authentic collection alongside showcasing some special edition collaborations from Raf Simons and the Amy Winehouse Foundation (womenswear) as well as an extensive selection of footwear and accessories.

Oliver Sweeney’s flagship London store feels more gentlemen’s club than shop, making it so much more than you’re average retail experience. It stocks the extensive collection of Sweeney’s trademark formal and casual footwear, plus the clothing and outerwear collection along with a range of accessories.

To add to the appeal, the store runs weekly shoe shine sessions and on Thursdays they even offer a tattooing service, it really is a one-stop shop!

Edwin’s Covent Garden boutique occupies part of the former St. Peter’s Hospital on the north side of the street with a simple utilitarian interior, feauturing a polished concrete floor, white walls, exposed trunking and huge windows at the back overlooking St. Paul’s Church garden. Edwin’s high quality denim has a rich history and traces its roots back to late 1940’s Japan when the brand was formed to import authentic denim from America when no denim was produced in Japan.

The store stocks both the mens and womens collections, as well as the ‘Made in Japan’ collection and also offers an on-site denim alterations service.

Joseph Cheaney & Sons have a rich history in the English shoemaking heartland of Northamptonshire and are one of the few remaining brands who can claim all of their products are wholly manufactured in England.

The range has expanded considerably since those days and this new flagship is to be their first standalone store in London and due to open May 2017, launching with a full brightly coloured range of menswear, along with selected womens and childrens pieces.